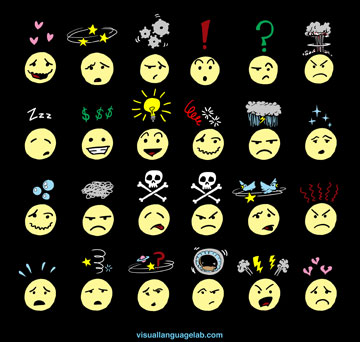 Here’s a fun blog post by Chris Schweizer on spotting “compositional tangents” while drawing comics. For those unfamiliar, Chris does the excellent “Crogan’s Adventures” series (Crogan’s Loyalty, Crogan’s March, and Crogan’s Vengence) which […]

While I was on the University of Bremen campus in Germany last month, I stumbled on a very appropriate poster hanging in the linguistics department (right) which sponsors a nice […]

Towards a visual sociolinguistics

I’ve heard some people complain that a “language” approach to drawings and sequential images is overly formal and washes out the ability to talk about socio-cultural issues. I actually think […]

I got a blast from the past today when my old friend and awesome comic artist Dan Fraga posted this video of “Commander” Mark Kistler’s classic drawing show from PBS, […]

Metaphors in the Bayeux Tapestry

Here’s an interesting article examining semantic aspects of the Bayeux Tapestry that just appeared in the latest issue of Review of Cognitive Linguistics. I’ve written before about Charles Forceville’s work applying […]

Universality and diversity in visual languages

One of the interesting byproducts of my theory of visual language is the implication that drawings are not universal. Because images look like what they represent (the are “iconic), they […]