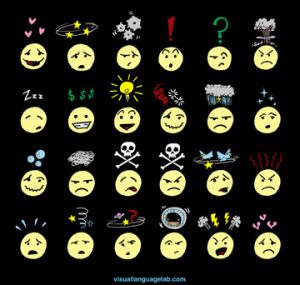 I’m very pleased to announce that my newest paper, “Combinatorial morphology in visual languages” has now been published in a book collection edited by Geert Booij, The Construction of Words: Advances in Construction Morphology. The overall collection looks excellent and is a great resource for work in linguistics on morphology across domains.

My own contribution makes a first attempt to formalize the structure of combinatorial visual morphology—how visual signs like motion lines or hearts combine with their “stems” to create a larger additive meaning.

This paper also introduces a new concept for these types of signs. Since various visual morphemes are affixes—like the “upfixes” that float above faces (right)—it begs the question: what are these affixes attaching to? In verbal languages, affixes attach to “word” units. But visual representations don’t have words, so this paper discusses what type of structure would be required to fill that theoretical gap, and formalizes this within the parallel architecture model of language.

You can download a pre-print of chapter here (pdf) or on my downloadable papers page.

Just as structured mappings between phonology and meaning make up the lexicons of spoken languages, structured mappings between graphics and meaning comprise lexical items in visual languages. Such representations may also involve combinatorial meanings that arise from affixing, substituting, or reduplicating bound and self-standing visual morphemes. For example, hearts may float above a head or substitute for eyes to show a person in love, or gears may spin above a head to convey that they are thinking. Here, we explore the ways that such combinatorial morphology operates in visual languages by focusing on the balance of intrinsic and distributional construction of meaning, the variation in semantic reference and productivity, and the empirical work investigating their cross-cultural variation, processing, and acquisition. Altogether, this work draws these parallels between the visual and verbal domains that can hopefully inspire future work on visual languages within the linguistic sciences.