Here’s a fun blog post by Chris Schweizer on spotting “compositional tangents” while drawing comics. For those unfamiliar, Chris does the excellent “Crogan’s Adventures” series (Crogan’s Loyalty, Crogan’s March, and Crogan’s Vengence) which I highly recommend.

So, what are these “tangents” that Chris is talking about? He describes tangents as “when two or more lines interact in a way that insinuates a relationship between them that the artist did not intend.” 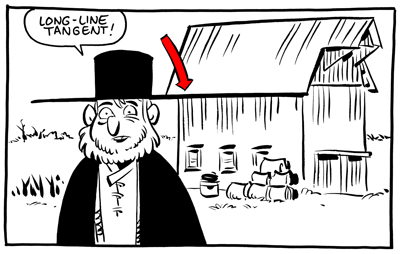 These include things like when one line runs into another line (as in the example image, taken from Chris’s article), or when lines all come to a single point unintentionally. He lists quite a range of them.

While it isn’t true of all of them, what he’s describing are essentially “illegal” line junctions of “graphic structure”—the component part of the drawing system that guides how we produce lines and shapes. The tangents that Chris discusses aren’t horribly bad junctions, which I’ll talk about below, but they are illegal combinations nonetheless.

In my book, I’ve compared the way that lines combine in drawings with each other to the way that sounds combine together in speech. For example, in English, it’s illegal to combine a “t” and “g” sound at the start of a word or syllable.

Similarly, the way that lines combine in line junctions is how graphic structure creates shapes, and different junctions imply different meanings. For example, a T-Junction looks like a “T”, and implies that one object is placed in front of another object. You can see some of these in the lines of the barn above, and of the interaction between the barn and the background shrubbery. The “T” shaped junction between these lines gives the meaning that the barn is in front of the background.

Certain combinations between lines thus lead to “illegal” junctions analogously to illegal sound combinations in speech. For example, the “continuous line” junction shown in the image above is weird because one line runs directly into another as a junction. You can very much mess up an image by altering its line junctions, as in the image below, which comes from my book.

I always like pointing these out, because they nicely fly in the face of the idea that you can’t make an “ungrammatical” drawing. Something is clearly wrong here! These junctions are discussed at length in the excellent book, Art and Representation by John Willats.

So, most of these problematic cases reflected in Chris’s article are problems with line junctions, and, as he says, they are easily remedied. The easiest solution is simply to make one thing overlap another—to create a T-Junctions—so that one thing appears to be in front of another. Go read the article!