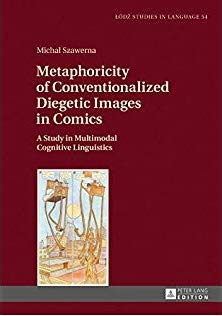 The non-universality of cartoony images and comics

There are many who assume that cartoony images and the ability to understand sequential images is universal. The 1978 study “Communicating with Pictures in Nepal” by Fussell and Haaland reports […]

Metaphors in the Bayeux Tapestry

Here’s an interesting article examining semantic aspects of the Bayeux Tapestry that just appeared in the latest issue of Review of Cognitive Linguistics. I’ve written before about Charles Forceville’s work applying […]

I recently found this interesting paper, “Impacts of manga on Indonesian readers’ self-efficacy and behavior intentions to imitate its visuals,” that attempts to dissect the factors influencing why Indonesian comic fans […]

2013 seems to be quite the year for books about theories of the comic medium! There’ve been at least four volumes that have come out this year, plus my own, […]

I’m often very excited when I find new research on comics, especially when it’s experimental. There is so little done that it’s a treat to find something I didn’t know […]

Review: How fast can you comprehend comic panels?

In this study, the authors wanted to know how much time it would take to comprehend each image of a sequence of images, both for how long each panel stayed […]