The non-universality of cartoony images and comics 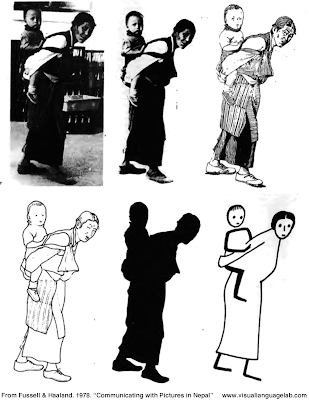 There are many who assume that cartoony images and the ability to understand sequential images is universal. The 1978 study “Communicating with Pictures in Nepal” by Fussell and Haaland reports on a study exploring these issues…

This study examined the understanding of images by indiivduals in Nepal. The researchers desired to communicate things related to nutrition, hygeine, reforestation, water supply construction, etc. as part of a UNICEF effort and assumed that wordless pictures would be an effective method. They therefore carried out these studies as a way to confirm that these intuitions were true by presenting 410 Nepalese individuals with drawings and asking for their interpretations. They quickly found that assumptions of universality were wrong.

First they report how Nepalese individuals understood different visual styles by asking them to interpret different types of images (for example, of people, like the image to the right). They tested photos, “blackout” photos with backgrounds omitted, highly detailed line drawings, semi-detailed line drawings with no shading, silhouettes, and cartoony schematic figures. They found that the content of different visual styles were recognized at very different proportions. People “accurately” recognized the content of cartoony (stick figure-esque) styles the worst (49%), while blockout photos without backgrounds (67%) and highly detailed line drawings (79%) were the best.

They had significant deficits understanding many aspects of single images, even images of faces with simple emotions in cartoony styles (happy – 33%, sad – 60%). They had even more difficultly related to actions (only 3% understood an image trying to convey information about drinking boiled water). Some respondents had radically different interpretations of images. For example, a fairly simple cartoony image of a pregnant woman was interpretted as a woman by 75%, but 11% thought it was a man, and others responded that it was a cow, rabbit, bird, or other varied interpretations. They also had difficulty understanding when images cut off parts of individuals by the framing of a panel (such as images of only hands holding different ingredients).

It’s worth noting that when looking at the images in the paper, they did not seem overly “poorly drawn” or ambiguous, as the image above shows. By American standards, they were fairly straightforward and drawn in a simple but clear manner. So, it’s not just that they were “bad drawings.”

Sequences of images fared no better. A two-image comparison of a mother bottle-feeding vs. breast feeding children was only recognized by 19% as being about bottle feeding at all, while only 3% recognized that the image pair was making a comparison.

They also had no assumptions about a left to right (or reversed) reading order, with less than 50% going in this intended order. With a 3-image sequence, some even started in the middle. Even with those who read them in order, most did not understand the connections between images.  The authors note that individuals’ degree of literacy was highly predictive of linear reading orders (though it’s unknown whether they could also understand those connections).

They state their biggest lesson echoed “Alan Holmes after a study carried out in Kenya in 1961-2: ‘It is never safe to act on assumptions as to what people will or will not understand visually without first testing the assumptions.'”

The remainder of the paper discusses efforts to improve instructional papers based on feedback from Nepalese.

In all, these findings are similar to others showing that cartoony images and sequential image understanding are not “universal” without exposure to an external cultural system. From the visual language perspective, these results are expected: one must have exposure and practice to a visual language—just like any other language—in order to understand it.