I’m often very excited when I find new research on comics, especially when it’s experimental. There is so little done that it’s a treat to find something I didn’t know about. Unfortunately, sometimes my excitement at new data turns sour when I see what was actually done… 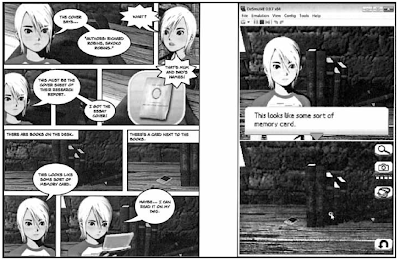 First off, the images make it extremely hard to tell what’s going on. Second, almost all of the balloons are placed outside of their originating panels to the extent that they completely overlap in panels forward and backward in the text. I don’t even need to know what’s in the text to know this will be confusing to a reader. This is so “illegal” in the rules of page construction that it is almost painful.

If this is their example (what is probably the best example they have), I shudder to think what other pages in the experiment look like. Seriously, if I wanted to design an experiment that had “incomprehensible comics pages” as one type of stimuli, I’d use pages like these.

It’s no wonder they found that their participants had poorer comprehension for the comic version—their stimuli are the equivalent of trying to test English comprehension while using broken English. It tells you next to nothing of interest.

There are two main points I’d like to make about this:

First, good experiments are hard to design, and having something worth saying must follow from having successfully designed an experiment that can give you good information. It pays to be critical as a creator and reader of scientific research (no matter what the topic).

Second, doing experiments using the visual language of comics is not trivial. Stimuli cannot be created by anyone, regardless of their fluency in comic creation. Just because you can throw together some images and words into panels on a page does not mean you’ve successfully created an example of “native” visual language. Believing otherwise does a disservice to yourself and to others who might read and cite your research.