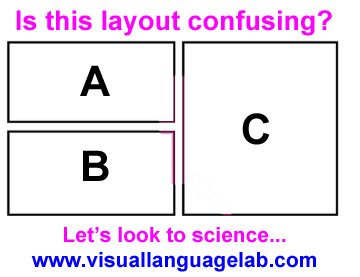 One of my more engaged-with blog posts of recent memory reviewed the data for whether the panel arrangement on the right was “confusing.” So, here’s a post with some additional thoughts on […]

There are many websites and twitter accounts that give advice about how to draw comics, and perhaps no other piece of “advice” arises more than the repeated advocacy to avoid […]

When I first started entering into discussions about visual language research, the fact that I actively created comics seemed like an important point that I would often stress. While I […]

Two for No: theory in practice

I’m happy to be able to announce that my friends Alexander Danner and Tym Godek have a new weekly comic series called “Two for No.” What makes it even more […]

Eye-movements for comic panels vs. photos

In the recent article, “Inferring Artistic Intention in Comic Art through Viewer Gaze,” the authors examined whether people’s eyes are more directed to parts of comic panels than they are when […]

Adventures in Cartooning is a fun and creative book by James Sturm and two of his graduates from the Center for Cartoon Studies, Andrew Arnold and Alexis Frederick-Frost, and published […]

Drawing Words and Writing Pictures by Matt Madden and Jessica Abel Before I started reading DW&WP, Matt Madden warned me that it was a book for praxis, not theory. As […]

This is pretty amazing new technology for photos that aggregates the information in many photos to create virtual environments, not to mention a pretty impressive navigational tool for photos and […]

Austin Kleon has a nice little post about point perspective in comics, noting his like of artists who don’t use it at all (link via Derik). The preference for point […]