2018: My publications in review

The last few years I’ve closed out the year by summarizing all of my papers that came out (2016, 2017), and so this year I’m doing the same. It’s been a diverse year of papers, with some theoretical papers, a few brainwave papers carried out by colleagues, and a corpus study. So, here are the papers that I published in 2018… 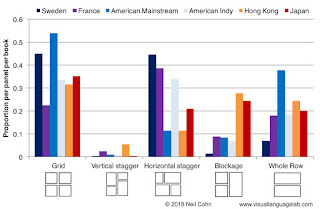 The cultural pages of comics (PDF) – This paper coauthored with my student assistants followed up our analysis of page layouts in superhero comics by comparing page layouts in 60 comics, 10 each from US superhero comics, US Indy comics, Japanese shonen manga, Hong Kong manhua, French bande desinée, and Swedish comics. Overall, we found that cultures differ in their page layout features in patterned and systematic ways. For example, layouts in Asian comics use more vertical segments, while those from Europe and US Indy comics use more staggering of panels within horizontal rows.

In defense of a “grammar” in the visual language of comics (PDF) – This theoretical paper reviewed my theory of narrative structure, and defended it against critiques that sequential image comprehension requires only meaningful connections between panels. I review and compare the theories, and lay out arguments for why a narrative structure is both necessary and supported by the experimental evidence. I also take the hard line that any proposal for how visual narrative sequences are understood must account for the cognitive results in experimentation.

Combinatorial morphology in visual languages (PDF) – In this chapter from the recent book The Construction of Words: Advances in Construction Morphology, I try to formalize the linguistic structure of the morphology (“symbology”) of visual representations like hearts or lightbulbs above the head, motion lines, and impact stars. It discusses both how these forms use systematic strategies to combine elements, and the ways they derive meaning through symbolic and metaphorical techniques. 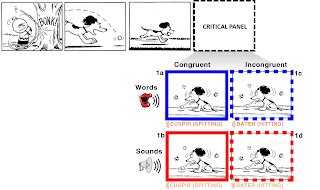 Listening beyond seeing (PDF) – My coauthor Mirella Manfredi carried out this cool study which showed people comics, and at the critical panel also played sounds to people. The panel showed an action, while either playing people a spoken onomatopoeia that matched or mismatched the action, or an actual sound effect that matched/mismatched the action. We measured people’s brainwaves, and found that their processing of these multimodal meanings partially overlapped, but partially did not. Brainwaves to words and sounds differed at the start of their processing, but in later parts of the processing seemed to not differ, implying some sort of integrative process.

Visual Language Theory and the scientific study of comics (PDF) – This chapter appeared in the recent book Empirical Comics Research, which has a wide survey of studies using empirical methods (corpus, computational, cognitive) to study comics. My paper provides a review of my Visual Language Theory, and its structures of vocabulary, layout, and narrative structure. I describe how theories of their structure combines with corpus analysis and psychological experimentation to give us a converging view of how visual languages in comics are built. I think it’s a relatively decent introductory paper for people who are unfamiliar with my theories.

Are emoji a poor substitute for words? (PDF, Poster) – Our conference paper from the 2018 Meeting of the Cognitive Science Society looked at how people process sentences when emoji are substituted for words. We found that people view emoji slower than words in sentences, but even slower when the emoji mismatches the part of speech (ex. a “noun-ish” emoji in verb position). When people read the next word after seeing a congruous emoji, they process it just as easily as seeing an all text sentence, but words after incongruous emoji are still read slower. This suggests that congruous emoji substituted for words can readily be integrated into the syntax of sentences. We also compared logos and emoji substituted in text, and found they didn’t differ in their processing.

Visual and linguistic narrative comprehension in autism spectrum disorders (PDF) – My first paper with my colleague Emily Coderre compares the brainwaves of neurotypical individuals with individuals with autism while they comprehended both verbal and visual narratives. People have often claimed that autistic individuals do better with visual materials, but we show similar processing deficits for both verbal and visual materials, hinting at a more general issue processing meaning across modalities. This is the first of my papers on autism and visual narratives with Emily, and we’ve got lots more on tap coming soon.

Workshop: How we make and understand drawings – Finally, not a publication, but back in April I gave two workshops at the University of Connecticut with philosopher Gabe Greenberg where we examine the structure and meaning of individual and sequential images. My portion (first day) examines how drawings are structured and how people learn to draw, which starts midway (02:18:15) through this video:

On the second day, my portion reviewed my findings about how visual narratives are processed, particularly the combination of narrative structure and meaning. I then presented my multimodal model of language and cognition. That’s in the second half of this video (02:04:20), which unfortunately has less good sound:

Forecasting ahead to next year, I can already say that it’s going to be a big year. I have a special issue of a journal that I’m editing that has some great looking papers. I also have two big review papers that should be coming out, one on processing and one on “fluency” of sequential images. Plus, we’ve now run five (!) brainwave studies in my operational EEG lab here in Tilburg, all of which are being written up. So, here’s looking forward to a good 2019…

These and all my papers are available on my website here.