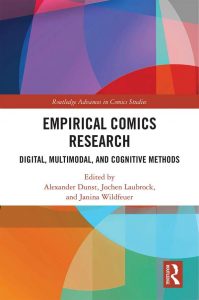 My latest paper is a chapter in the exciting new book collection, Empirical Comics Research: Digital, Multimodal, and Cognitive Methods, edited by Alexander Dunst, Jochen Laubrock, and Janina Wildfeuer. The book is a collection of empirical studies about comics, summarizing many of the works presented at the Empirical Studies of Comics conference at Bremen University in 2017.

It’s fairly gratifying to see a collection like this combining various scholars’ work using empirical methods to analyze comics. I’ve been doing this kind of work for almost two decades at this point, and most if it has been without many other people doing such research, and certainly not coming together in a collaborative way. So, a publication like this is a good marker for what is hopefully an emerging field.

My own contribution to the collection is the last chapter, “Visual Language Theory and the scientific study of comics.” I provide an overview of my visual language research across the fields of the visual vocabulary of images, narrative structure, and page layout.

I also give some advice for how to go about such research and the necessity of an interdisciplinary perspective balancing theory, experimentation, and corpus analysis. The emphasis here is that all three of these techniques are necessary to make progress, and using one technique alone is limiting.

You can find a preprint version of my chapter here, though I recommend checking out the whole book:

Abstract of my chapter:

The past decades have seen the rapid growth of empirical and experimental research on comics and visual narratives. In seeking to understand the cognition of how comics communicate, Visual Language Theory (VLT) argues that the structure of (sequential) images is analogous to that of verbal language, and that these visual languages are structured and processed in similar ways to other linguistic forms. While these visual languages appear prominently in comics of the world, all aspects of graphic and drawn information fall under this broad paradigm, including diverse contexts like emoji, Australian aboriginal sand drawings, instruction manuals, and cave paintings. In addition, VLT’s methods draw from that of the cognitive and language sciences. Specifically, theoretical modeling has been balanced with corpus analysis and psychological experimentation using both behavioral and neurocognitive measures. This paper will provide an overview of the assumptions and basic structures of visual language, grounded in the growing corpus and experimental literature. It will cover the nature of visual lexical items, the narrative grammar of sequential images, and the compositional structure of page layouts. Throughout, VLT emphasizes that these components operate as parallel yet interfacing structures, which manifest in varying ‘visual languages’ of the world that temper a comprehender’s fluency for such structures. Altogether, this review will highlight the effectiveness of VLT as a model for the scientific study of how graphic information communicates.