New paper: Not so secret agents

I’m excited to announce a new paper, “Not so secret agents: Event-related potentials to semantic roles in visual event comprehension,” in the journal Brain and Cognition. This paper was done during my time in the lab of my co-author, Marta Kutas, and collaborating with my friend from grad school, co-author Martin Paczynski.

This paper is a follow up of a study Martin and I did previously that found that agents-to-be, the doers of actions, elicit more predictions about subsequent events than patients-to-be, the receivers of actions. For example, an agent-to-be would be a person reaching back their arm to punch (like in this image from the classic How to Draw Comics the Marvel Way), which will convey more information about that upcoming event than the patient-to-be (who is about to be punched).

In this follow up, we measured participants’ brainwaves to see whether this type of “agent advantage” appears when comparing these agents appear in preparatory postures against patients, and versus those with agents where we took away the preparatory postures. So, instead of reaching back to punch, the agent’s arm instead would be hanging next to their body, not indicting an upcoming punch. We found indeed that preparatory actions appear to be more costly prior to an action, and appear to have a downstream influence on processing the subsequent action. 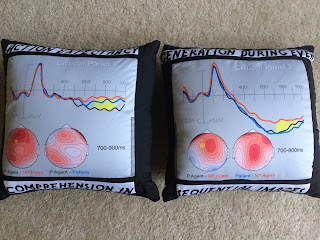 The paper is available here or on my downloadable papers page or this direct pdf link, and is summarized concisely in Experiment 1 of this poster, which has subsequently made for some keen pillows on my couch (right).

Research across domains has suggested that agents, the doers of actions, have a processing advantage over patients, the receivers of actions. We hypothesized that agents as “event builders” for discrete actions (e.g., throwing a ball, punching) build on cues embedded in their preparatory postures (e.g., reaching back an arm to throw or punch) that lead to (predictable) culminating actions, and that these cues afford frontloading of event structure processing. To test this hypothesis, we compared event-related brain potentials (ERPs) to averbal comic panels depicting preparatory agents (ex. reaching back an arm to punch) that cued specific actions with those to non-preparatory agents (ex. arm to the side) and patients that did not cue any specific actions. We also compared subsequent completed action panels (ex. agent punching patient) across conditions, where we expected an inverse pattern of ERPs indexing the differential costs of processing completed actions as a function of preparatory cues. Preparatory agents evoked a greater frontal positivity (600–900 ms) relative to non-preparatory agents and patients, while subsequent completed actions panels following non-preparatory agents elicited a smaller frontal positivity (600–900 ms). These results suggest that preparatory (vs. non-) postures may differentially impact the processing of agents and subsequent actions in real time.