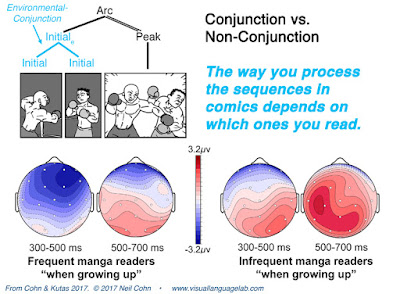 I’m excited to announce that my new paper “What’s your neural function, narrative conjunction: Grammar, meaning, and fluency in sequential image processing” is now out in the open access journal Cognitive Research: Principles and Implications. This study was co-authored by Marta Kutas, who was my advisor while I was a postdoctoral fellow at UC San Diego.

Simple take home message: The way you process the sequences in comics depends on which ones you read.

The more detailed version… This study is maybe the coolest brain study I’ve done. Here, we examine a particular pattern in the narrative grammar used in comics: Environmental-Conjunction. This is when you have characters in different panels at the same narrative state, but you infer that they belong to the same spatial environment.

Most approaches to comprehending sequential images focus on just the comprehension of meaning (like in “panel transitions”). However, my theory says that this pattern involves both the construction of meaning and the processing of this narrative pattern. The patterning uses only a narrative grammar which is independent of meaning.

When analyzing people’s brain responses to conjunction patterns, we found support for two processes. We found one brainwave associated with an “updating” of a mental model (the P600), and another associated with grammatical processing (an anterior negativity). Crucially, this grammatical processor was insensitive to manipulations of meaning, indicating that it was only processing the conjunction pattern. So, you don’t just process meaning, but also the narrative pattern.

But, that’s only the first part…

In other analyses, we’ve shown that Japanese manga use more Environmental-Conjunction than American or European comics. So, we used a statistical analysis to analyze whether participants’ background reading habits influenced their brain processing of conjunction. And… it did!

Specifically, we found that participants who more frequently read manga “while growing up” tended to rely more on the grammar processing, while infrequent manga readers used more updating. In other words, since frequent manga readers were exposed to the conjunction pattern more in their reading habits, their brains used a more automatic, grammatical process to comprehend it. Note: this result is especially cool, because our comics stimuli were not manga, they were manipulated Peanuts strips that used a pattern frequent in manga.

You can read the paper online here, download the pdf here, or check out the poster summary.