Mayan visual narratives in the BBC! 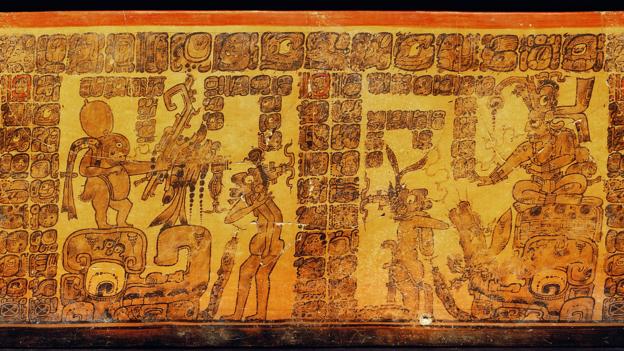 I’m very happy to say that David Robson over at the BBC has a new article out discussing Jesper Nielsen and Søren Wichmann’s chapter in my new book, The Visual Narrative Reader.  Their chapter, and the BBC article, examine the structural properties of Mayan visual narratives found on the sides of pottery.

There are a lot of great things in their chapter that motivated me to invite them to be a part of the collection. Foremost, they nicely show that these Mayan systems share many properties with the “visual languages” used in comics and other cultures, ranging from the way they show sequences to the way they use text-image relationships and graphic signs like lines to show smells or speech.

In my conception of sequential image systems being like language, there is no one visual language, but rather there are many throughout the world. In addition, just as spoken languages change and die off over time, so do visual languages. The system used in the Mayan visual narratives thus reflects a “(Classic) Mayan Visual Language” tied to a particular time period and location. Similarly, we could identify historical visual languages from different time periods all over the world.

I’ll point out also that this is different than saying that Mayans used “comics.” This is not the case. “Comics” are the context in which we use some visual languages in contemporary society, and casting that label back in time is inappropriate. Rather, they have a visual language that is used in its own context tied to its era.

What makes the Mayan examples nicely illustrative is that they are an older, historical version of this that is preserved in the historical record. The visual language used in sand drawings (also discussed in two chapters of The Visual Narrative Reader.) disappears once it is drawn, because of the medium of sand, while the accompanying gesture/signs and speech disappear because they are spoken verbally. This means there is no historical record of them. But, the Mayan examples on pottery and ceramics are drawn and include writing, those artifacts can provide a window into past human behavior as a multimodal animal.

Finally, what I really liked about this article—beyond the the subject matter—was the way in which the subject matter was analyzed using systematic linguistic methods. I think this nicely shows how much of what has previously been discussed in “art history” can really be transported to the linguistic and cognitive sciences given the theory of visual language. If we’re talking about the structure of older drawing systems, then we’re not discussing “art” per se, but rather are discussing ancient visual languages and their structure. Further focus like this can contribute towards building a study of historical visual linguistics that can then analyze such material the same way as we think of any other type of linguistic system.