Since my last post discussed my new paper on action stars, I thought it would be worth doing a refresher on these types of panels in the visual language of comics. “Action stars” are a type of panel that replaces a primary action of a sequence with a star-shaped flash, which on its own usually represents an impact. In the case of action stars, this representation is blown up so large that it encompasses the whole panel, as in the third panel here:

Interestingly, the “star shaped flash” of action stars does not necessarily just convey an impact—my study has shown that seems to generalize to lots of events even without an impact. One reason might be because the “star shaped flash” representation is also the way to typically represent the “carrier” of sound effects. Sound effects, like “Pow!” do typically—but not always—accompany action stars. So, this representation is technically polysemous between impacts and loud sounds—the same physical representation can have multiple meanings—and in the case of action stars it is a little ambiguous.

The key thing I want to focus on here though is that action stars replace the primary actions of the sequence, and thus cause those events to be inferred. In the example above, you infer that Snoopy is run over by the boys playing football, though you don’t see it. This doesn’t happen “in between the images,” but happens at the action star itself, though you don’t know what that event is until the next panel.

I discuss these types of “replacing panels” (“suppletive” in linguistic parlance) quite a bit in my book, The Visual Language of Comics, where I pointed out that not all images can work in this way. For example, the “fight cloud” in (b) does work effectively to replace panels—here meaning specifically a fight, not a general action like action stars. But, not all panels can play this “replacing” role. For example, using a heart to replace a whole panel doesn’t work as well (c), even when it’s used in a context where it could be possible (d): 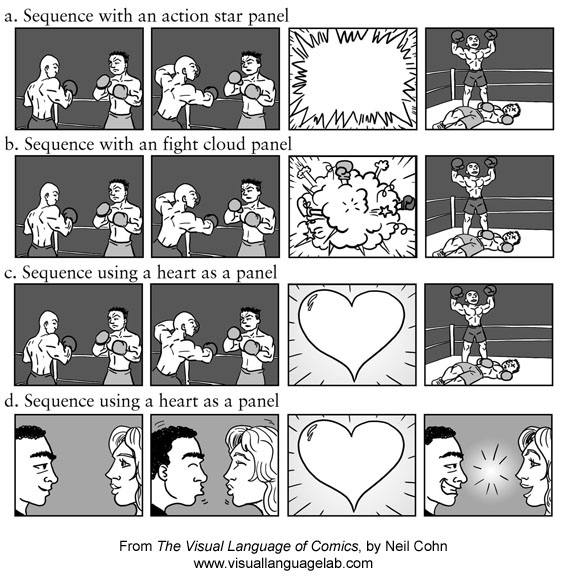 So, not all elements can replace actions in panels. Recently, I stumbled on another one though in the comic Rickety Stitch and the Gelatinous Goo where an imp uses magic to transform into looking like a gnome: 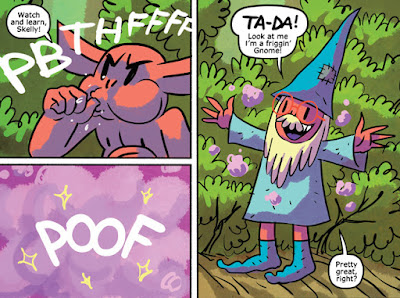 Again, a full panel here does not depict the action, but replaces the event, leaving it to be inferred. In this case, the “poof cloud” provides a particularly useful covering for avoiding the representation of the physical transformation (which might be a pain to draw). Instead, this transformation is left to the audience’s imagination.

In many cases, the onomatopoeia is not needed for these replacement panels, and I’ve found examples both with and without text. Similar replacement seems to occur without the visual language of the images (clouds, stars), and with the onomatopoeia alone, as in this Calvin and Hobbes strip:

So, onomatopoeia and these replacing panels can go together, or separately. In all though we seem to have an overarching technique for “replacing actions” with visual and/or verbal information which causes inference for the missing information. In the case of the visual information, it seems we have at least three systematic usages: action stars, fight clouds, and poof clouds. Perhaps there are more?