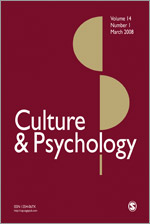 I’m happy to say that I have a new article (pdf) published in the journal Culture & Psychology! This one continues with my theories about how people learn how to draw.

In my previous article (pdf), I argued that drawings were structured like languages, and that learning how to draw involves learning a “visual vocabulary” from an external system. I also argued that the reason people feel that they “can’t draw” is because they do not sufficiently have exposure and practice with these visual languages, and thus don’t learn how to draw with “fluency” before the end of a critical learning period.

This new paper pushes this idea even further, and proposes that people’s ability to draw is actually hurt by the way in which our culture thinks about drawings and graphic expression. As I’ve argued for a long time on this blog (with the tag “Art vs. Language“) there is a perspective held about “Art” that pushes people towards drawing in unique and individualistic ways, admonishing imitation as a means of learning. This paper argues that the cultural set of assumptions including these ideas actually inhibits people’s ability to learn how to draw.

A pdf of the paper is available here, while the official abstract and information from the publisher is here. Here’s the abstract:

Why is it that many people feel that they “can’t draw”? In a recent article Cohn, 2012, I put forth a new theory that compared the cognitive structure of drawing to the cognitive structure of language. Like language, drawing uses schemas that combine in innumerable novel ways, and thus children learning to draw must acquire these schemas from the drawings in their environment. However, while most people in the United States and Europe “can’t draw,” Japanese children have far greater proficiency in drawing. This paper explores reasons for this cultural disparity in graphic fluency originating in the structure of the drawing systems in those respective cultures and the beliefs that frame ideas about drawing and art education. In particular, I explore the intriguing possibility that cultural assumptions admonishing imitation of other people’s drawings prohibits the acquisition of graphic schemas, thereby leading to people feeling that they “can’t draw.”