A Caveat: misunderstanding comics and the brain

Via this article I stumbled onto this dissertation which promotes using comics in educational contexts (a topic I am very interested in).

In one of the chapters of the thesis, it looks at the understanding of comics and includes a “neuroscience” section. Now, even when I disagree with them, I am always one to encourage research and writing on the structure and comprehension of comics (and I am wholly in support of the effort that this thesis is trying to make with regard to graphic textbooks). However, I have also railed on the invocation of neuroscience when used inappropriately.

Given my commitment to educating about comics and the brain, it behooves me to explain exactly what is wrong with a discussion like this, and especially what is misleading/wrong with an image like this: 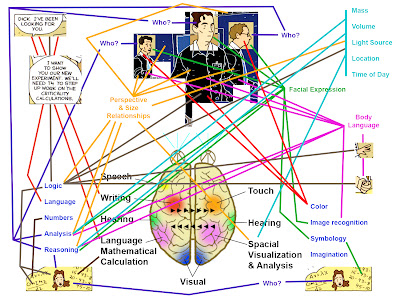 This graphic—and the accompanying description—reflect the worst of misunderstandings and invocations about the brain. Here are among the problems:

For example, while the occipital cortex (back of the head) is the “primary” visual area, the visual system alone goes up through the top of the cortex (the “dorsal stream”), down into the bottom, temporal lobe (the “ventral stream”), and connections from the eyes go through the middle of the brain on its way to the occipital lobe in the first place. In other words: the visual system engages lots of different parts of the brain, not just back of the head. (…and where is the rest of the brain in this image???)

2) Discussing the brain is entirely unnecessary in a thesis like this. The overall point that this thesis is trying to make is that comics are very complex and involve numerous interacting parts that we understand almost effortlessly. This point does not rely on discussion of the brain to come across. In fact, I myself have done quite a lot of work describing the complexity of structure found in comics, some of which discusses the brain, and some does not.

This thesis does not need it, and including a poorly-understood discussion of the brain only hurts its overall point. Now, studies have shown that just including an image of the brain somehow convinces people that its point is more believable. However, unless the thesis is actually about the brain, such discussion is unnecessary and borderline dishonest (albeit unintentionally). Which leads us to…

3) If you’re going to talk about comics and the brain, at least do the basic research to discuss what work has actually been done on this topic. Granted, there are a limited number of studies that have directly examined this issue. However, they are out there, and reviews of some of these papers can be found on this very blog: Here, here, here, and here.

I myself have now done three studies looking at comics and the brain. I’m currently writing up my latest two studies (which were my dissertation), but my first experiment is online here: Full pdf article, Short “comic” version.

I’ll close by reiterating what I said in my previous post on this topic:

My point overall is this: as cool and interesting as it is, not all arguments need to be tied to the brain and cognition. And, in fact, some arguments are made weaker by doing so, since appealing to neuroscience is unnecessary at best and hand-waving at worst.

Figure out what your point is and talk about it. I’m guessing it actually has little to do with neuroscience directly.