Savage Chickens never seems to fail to give me a laugh. This one especially had me chuckling… 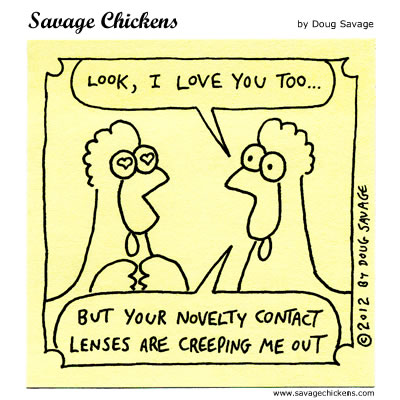 The reason I liked this one so much is that it plays on a common convention where certain symbols (like hearts) replace the eyes of a character. I’ve likened this type of substitution to a kind of morphological change in words when a word changes in meaning through an internal change of the sounds. For example, to make the past tense of jump we add -ed to make jumped. But, to make the past tense of run we change the sound of the vowel to make ran. This internal change is called “umlaut.”
In a sense, substituting a sign for the eyes or pupils of a character is similar to umlaut, since it makes an internal change in the face of a character to change its meaning. This creates a whole class of “eye-umlauts” that include hearts, stars, dollar signs (or any money signs), spirals, X’s, and others. Indeed, we could even make new eye-umlauts too, such as using “+” plus signs in the eyes to insinuate someone is lying (for instance).
In this way, the morphology of images uses a similar strategy as the construction of words in language.