I’ve posted every now and again about a convention in comics that I’ve called “action stars”, where a whole panel is replaced by a star shaped “flash” that essentially represents “event happens here!” but doesn’t show that event. I’ve likened this to being like a pronoun in the visual grammar, since it can replace the Peak events of the sequence, just like a pronoun can replace a noun (or noun phrase).

Over the past year I’ve run some successful experiments using action stars, and am planning a few more of them. But, I’ve also had the lingering question whether there are any more of these “visual pronouns” out there…

And I think I’ve found one.

Another common piece of visual morphology is the “smoke-veiled fight” (alternative names welcomed), where a big puff of smoke is shown with arms and legs sticking out, to stand for a fight occurring, which can also take up a whole panel: 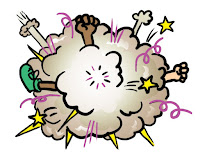 Some interesting contrasts can be made between the smoke-veiled fight (SVF) and action stars. First off, SVF panels are much more restricted; they can only appear for fights, whereas action stars can go on almost any Peak panel. We might write this out this difference in meaning formally as:

This basically says that an action star carries the unspecified meaning that an Event “X” occurs, but SVF panels show an Event of “Fighting”, consisting of at least characters A and B up to “n”.

Also of interest is that while both depict “events”, the nature of those events is intrinsically different. Action stars show a single event, while SVF panels show a duration. Notice, you can’t glean the sense of duration from an action star, nor can you interpret the SVF as a single event. But, the difference is there — even though in neither one can you actually see what events are “actually” happening!