More on the Burnt City Bowl

Apparently I’ve been getting linked to a lot for my previous post on the Burnt City animation drawing of an illustrated goat jumping along the outside of an earthenware bowl.

In my post, I argued that — contrary to the fairly dubious claims that this was the “world’s earliest animation — this is better suited to be thought of as just an ancient example of visual language use. The closest modern analog would be a “comic”, though I hate applying the term to ancient artifacts. 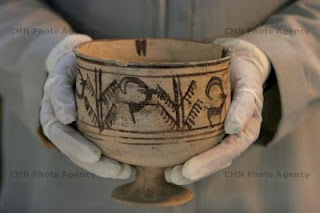 However, what I’m wondering about is why would anyone expect that this would have such a usage? Isn’t it a lot more logical just to assume that it was used as a bowl. Why would we think that ancient bowls with sequential images on the outside are somehow exempt from their normal use as receptacles for holding things?

In fact, beyond the modern coffee mugs that do this, we have lots of historical examples as well. For example, there is a whole huge collection of these types of bowls from ancient Maya.

So… why shouldn’t we think that its primary function is just as a bowl, and that it just happens to have a cool example of sequential images on it with absolutely no intended use as “animation”?

—EDIT 11/2013—
The comments section on this and all posts related to the Burnt City Bowl are now closed, due to the inordinate amount of anonymous and slanderous comments left by people clearly bearing some type of political agenda (however construed). All comments made on this blog of such a nature will be deleted during moderation prior to being published.