In discussing this post of mine with Derik, I realized that I should post on the technique I used of substituting a whole panel for an “action star,” like this:

This usage is somewhat similar to what I talk about in this older article on metonymy, and the same phenomena creeps up overtly in McCloud’s famous “Closure” example from Understanding Comics: 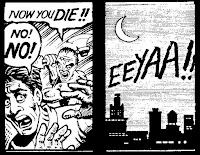 In both cases, we never see the action, because it’s replaced by a panel that implies action took place, but replaces the image with some neutral information. In the case of the action star though, we associate that sign with events, so it further indicates the presence of an action, whereas in McCloud’s example the text does most of this work, since the cityscape is entirely neutral.

I’ve recently been exploring this phenomena a lot more, especially since I keep seeing it in Peanuts strips, first shown (I believe) in this one:

So, we now have this phenomenon where we know we can substitute certain types of panels for others to get an entailment of the actions. For storytelling, this is pretty cool, since it forces the reader to draw an inference about the actions (a result interesting enough that McCloud extended this out to all interactions between panels).

However, are there also restrictions on which types of panels we can replace? Since the action star essentially just means “events occurring!” but doesn’t show them, it can be considered as a kind of “visual pronoun.” Because of this, it can also be used as a diagnostic for determining certain categories of panels versus others. This “pro-form” replacement is a common technique in linguistics for determining grammatical categories: we can replace Noun Phrases with the pronoun “it”, and Prepositional Phrases with “there”:

In 2 and 3, we can see that this substitution works fine, but when we reverse which ones we’re substituting for, in 4 and 5, it sounds awful (indicated by the asterisks).

So… can we do this using an “action star” as a kind of visual “pronoun”? Check out these Peanuts strips, where the action star replaces either the second or third panels:

When the second panel is replaced, it does not seem to make much sense (nor would it make much sense in the first or final positions here either). However, replacing it for the third panels does work — hinting that those panels belong to a certain class of words where a culmination of an action occurs (even when that action isn’t an “impact”).

Note also that an approach using linear “transitions” between panels would be unable to express this: what would the action star be a transition of — a “Non-sequitur”? That wouldn’t be able to capture the understanding of the event occurring in that panel. Rather, this hints that transitions (based on the relations between panels) are not the way sequences are understood, and the need of some sort of global narrative structure (with categories for actual panels) underlying the sequence.