Are you ready to Folk Rock!?

I don’t often write about my non-theory tastes on this blog, like music, though I keep meaning to. So, here’s a good place to start.

Today, I got my copy of the new Counting Crows live album “New Amsterdam,” and its just fantastic. 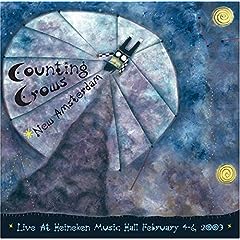 Not only have they been my favorite band since their debut, but Adam Duritz went to Berkeley and is an unabashed Cal Sports nut (as am I: Go Bears!). (Astute readers might have noticed the cameo of him I drew into We the People.)

I have a ton of their live stuff, largely not “official releases” and this album is great. As soon as that first song started it felt like home. It has lots of variety in song choices from across their albums (including one new song and one old one that was only on bootlegs before), and good versions of all of them. Interestingly, some of their most prominent songs, like “Mr. Jones” and “Round Here” are absent. I think this is good move, since so much of their stuff is great and I’d hate for the band to be overshadowed by their most known hits.